ANFA or a perfect storm in a cup of tea.

Two basic issues are very clear about ANFA, the Agreement on Net Financial Assets of the European Central bank. First, the ECB has been reticent about this agreement. Second, what the Frankfurter Allgemeine Zeitung (FAZ) has written on December 7th under the captivating title “Heimliches Gelddrucken in Rom und Paris“ (Secret money printing in Rome and Paris) is basically wrong 1. Neither of the two issues deserves the great commotion that was devoted to the issue of ANFA, especially in Germany.

Let me expand on the two points.

The ECB has clearly been reticent about the entire ANFA issue 2.  Until December 10th, one week after the question was raised in the press conference of December 3rd, if you would have done a search on the ECB website, under the word ANFA, the only thing you would have found was a letter from the ECB president to a member of the European Parliament, Mr. Chountis. The letter was short, still it carried an important message: “The holdings of Greek government bonds under the Agreement on Net Financial Assets (ANFA) in the investment portfolios of the euro area national central banks (NCBs) are managed by the NCBs themselves as part of their national tasks. Any investment operation that they carry out for the ANFA portfolios has to be in line with the objectives set out in national and European law.” The letter continued with the statement that the ECB had concluded that a certain operation that was proposed by the Greek central bank under the ANFA agreement was incompatible with the EU Treaty.

The important point in the letter is that the ECB must be informed and control the operations of national central banks (NCBs) under the ANFA agreement, to assure itself that they are consistent with its monetary policy and, more generally, with its objectives and tasks. What made me unhappy at the press conference on December 3rd was the contradiction between this important point made by Draghi in the letter to Mr. Chountis and what he answered to a question: ”On the second question, ANFA purchases are entirely a matter for national central banks. They decide their investment policy in complete independence. Often it’s very hard to understand the purposes as to why they buy certain bonds. ……So it’s a question that I think you should ask them.” No, ANFA purchases cannot be a matter entirely for NCBs, they cannot decide their investment policy in complete independence if the ECB must be assured that what they do does not interfere with its monetary policy and with the prohibition of monetary financing, i.e. with articles 123 and 124 of the EU Treaty.

On December 10th the ECB published a welcome note explaining what is ANFA, making again the point that: “…the Governing Council of the ECB is in full control of the size of the Eurosystem balance sheet. The maximum amount of net financial assets in the Eurosystem is decided beforehand by the Governing Council. There is no such thing as ‘money printing by NCBs’ outside of the Eurosystem framework. In any case, the Governing Council ensures that all Eurosystem operations are performed according to the Statute, and especially to Articles 123 and 124 of the Treaty which forbid monetary financing.”  It is a pity, though, that this ECB note came only after the excitement about ANFA was allowed to grow beyond proportion and did not give information about the size of the relative portfolio, which was the high point of the FAZ article.

It is a moot point why the ECB was reticent about ANFA at a time when it is being giving much more information on its deliberations and operations. There are, however, a couple of hints in the ECB utterings that seem to indicate that the ECB succumbed to pressure for secrecy from NCBs. The first hint is in the words of Draghi at the press conference: “Some of them communicate, by the way, and some others don’t. You have central banks that don’t tell anything about ANFA, so you wouldn’t be able to know how many bonds they purchased. So the question that you may have about ANFA should be asked to the national central banks.” The second hint is in the ECB note of December 10th, where it is noted that only some NCBs publish information, meaning implicitly that some others are less transparent.

I hope that the ECB will now prevail over the desire of secrecy of NCBs and be more transparent about the entire ANFA affair. If this will be the case, the FAZ article, however wrong, will have had a positive effect.

Let me come now just to the FAZ article and to my assertion that it is basically wrong. An increase of 500, and even more 700 billion, of € securities purchased by NCBs within the ANFA portfolio, as reported by FAZ, is very large and it should be easy to locate it in the balance sheet of the Eurosystem, even if this is now so much larger than in pre-crisis and the ECB is not transparent on the ANFA issue 3.  Figure 1 reports the asset side of the so-called simplified balance sheet of the ECB (or Eurosystem to be more precise, meaning the consolidated balance sheet of the ECB and of the 19 NCBs within the €-area).

In this figure we graphically see that the action, in terms of balance sheet changes, is dominated by the items layered on its top, which are determined by monetary policy, rather than by those on the bottom, which are unrelated to it. So this is first evidence that it is monetary policy, as decided by the ECB, that moves the balance sheet of the Eurosystem, not things that NCBs do.

More specifically, also looking at table 1, we see that, out of the about 1.500 billion increase in total

Table 1. Changes in the balance sheet of the Eurosystem between January 2007 and December 2015. Billion €.

(**)      The table presents figures net of an accounting change at the end of 2008 moving circa 160 billion of securities from the “Other Assets” to the “Other Securities” items. See the annex for a more detailed description.

balance sheet size between January 2007 and December 2015, about 330 billion are due to gold and claims in foreign currency, together constituting foreign exchange reserves, which are broadly associated with monetary policy 4; the “Other claims on euro area credit institutions denominated in euro”, which predominantly includes Emergency Liquidity Assistance, increased by about 110 billion, while the bulk (more than 800 billion) of the rest is, as it should be, explained by changes in the items directly relating to monetary policy operations: the Longer Term Refinancing Operations (circa 300 billion increase) and the Securities for Monetary Policy (nearly 750 billion increase), far offsetting the decrease of the Main Refinancing Operations (-230 billion). Thus there is not, so to say, room in the Eurosystem balance sheet for 500, leave alone 700, billion increase in the € securities bought by NCBs under ANFA.

While the lack of transparency on ANFA does not allow precisely identifying the size of the € securities bought by NCBs under ANFA, the item in the ECB balance sheet closest to this concept is “Other Securities”, which are not held for monetary policy purposes. This item increased by about 260 billion between 2007 and December 2015. However, as can be seen in the figure and in the footnote to the table, there was a discrete jump, of circa 160 billion, in this item at the end of 2008, resulting from an accounting change, whereby this amount of securities was re-classified from “Other Assets” to “Other Securities”. Net of this accounting change, which does not correspond to any actual purchase and is indeed totally irrelevant from a monetary policy point of view, the increase in the balance sheet item that includes, in my understanding, the purchases of € securities by NCBs under the ANFA is about 100 billion. A more detailed explanation of why the FAZ article is wrong is in the Annex, to which the Saint Thomas readers of this post can look.

In conclusion, my estimate, based on the limited information published by the ECB, is that the securities in € bought under the ANFA portfolios by NCBs increased in the about 9 years between the beginning of 2007 and September 2015 by circa 100 billion only, thus a fraction of the 500-700 billion reported by the FAZ article. For my taste, even such much smaller increase is too much, as I am not convinced that investment activities are a necessary responsibility of central banks. Still, I recognize that in the Statute of the ECB it is explicitly recognized, in article 14.4, that NCBs can continue to have national responsibilities if they do not hinder the ECB monetary policy, and one of these national responsibilities can be financial investment.

Of course I do not know how the detailed analysis of Dr. Hoffmann, mentioned in the Annex, got translated in the alarmist FAZ article. My supposition is that an over-zealous FAZ journalist, keen to show the monetary malfeasances of the European Central Bank, did not talk enough with Dr. Hofmann and thus misunderstood his results and unduly translated them into an eye-catching story.

The FAZ article refers to a dissertation written by Dr. Daniel Hoffmann of the Technische Universität Berlin, with a preface by Prof. Dr. Hans-Werner Sinn and Prof. Dr. Dr. Gunnar Heinsohn. One of the “Gutachter” (Appraiser) of this dissertation was Prof. Dr. Markus C. Kerber, mostly famous as promoter of all possible cases against the European Central Bank at the German Constitutional Court.

As I understand it, the figures of 500 is derived from the following chart in Dr. Hoffmann dissertation 5: 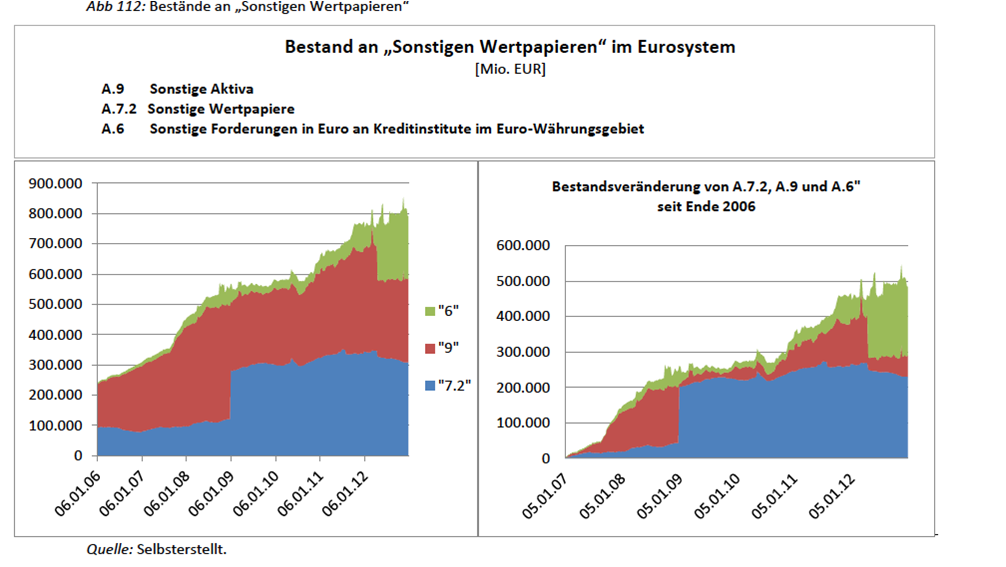 The figure of 500 billion increase (it is not clear to me from where the 700 billion figure would come from) would refer to the change in the sum of the following asset balance sheet items of the Eurosystem, as in the right panel above:

Figure 2 reports item 7.2, which presumably includes the € securities component of the ANFA portfolios, as well as items 6 and 9. The figure is consistent with that of Dr. Hoffmann and updates.

Figure 2. Items 6, 7.2 and 9 of the Eurosystem balance sheet: level and changes.

It should be noted that there are two accounting changes affecting the three items:

Of course these two accounting changes had no effect on the total size of the Eurosystem balance sheet and did not, in particular, “pump” any money into the system. Indeed, from a monetary point of view they are just irrelevant.

In conclusion, net of the accounting change mentioned above, item 7.2, which in my understanding includes the € component of the ANFA portfolios, changed between the beginning of 2007 and September 2015 only by circa 100 billion, so a far cry from the 500-700 billion reported by the FAZ article.

Previous: What will happen on December 3rd in Sonnemannstraße?
Next: Yes, bank credit supply is improving in the €-area.