Is the price stability target of the ECB at risk?

Francesco Papadia November 18, 2013 0 Comment
Get me right. I am not fearing, for the time being, that inflation will move above the 2.0 per cent ECB target. Of course, it would be wrong to assume that inflation is dead and can never come back and the central bank must be symmetrically alert to all deviations from price stability. Too high inflation is not, however, the risk against which to guard in the foreseeable future. The issue I want to explore here is whether there is a risk of inflation remaining too low for too long. This issue is germane to the risk of “Japanification”, which has started to be discussed in the market.

In order to provide my answer to the question in the title, I will first look at the past: how good has inflation control been since 1999? Second, I will consider the medium and long term inflation forecasts/projections that are available to see what is the central scenario currently prevailing. Then, I will give my own assessment and will explore which tools the ECB has to fight possible undesired developments.
If you cannot wait until the end of this post to have my answer, I anticipate it here: yes, there is a risk for the price stability objective, but the probability of this unfavourable development is low if the ECB will use its tools appropriately.
Inflation control so far
The first thing to be said about the control of inflation since 1999 is that the average rate of inflation in the €-area has been, at 2.04 per cent in this 15 year period, really indistinguishable from the 2.0 target. There are three additional considerations on can make to zoom on this result: two reinforce the positive judgment about the ability of the ECB to control inflation, a third one introduces some kind of qualification to the assessment of central bank action.
The first consideration reinforcing the positive assessment of the ECB control of inflation comes from chart 1.
Chart 1: Inflation developments in Euro area countries
In the chart one sees that the improvement in inflation control in the €-area coincides with the introduction of the € and that this brought about not only a lower rate of inflation for the entire area but also a much lower range between the highest and the lowest national rates. So, the control of inflation of the ECB has been better than that of the national central banks that gave up their monetary sovereignty when the € was introduced.
The second consideration is that, if the control of actual inflation has been good, the control of inflationary expectations has been about perfect, as can be seen from Chart 2.
Chart 2: ECB survey of professional forecasters-inflation forecasts
This result is relevant because it is obvious that inflation is buffeted by temporary, non monetary shocks that cannot be foreseen and therefore do not influence expectations. The precision in the control of expectations is therefore, in a way, a better indicator of the ability of the central bank to deliver its objective of price stability, as expectations filter away the temporary shocks that the central bank can neither foresee nor control.
The third consideration is that the control of inflation by the ECB has been better over a long rather than over the medium term that is mentioned in its target. This can be seen in chart 3, where a 3 year and a 7 year moving average of inflation are reported. There one sees that only if one pushes the averaging towards the long rather than the medium term, is inflation control precise enough. For instance, for the shorter averaging period of 3 years, inflation is well below or above target for quite a few years.
Chart 3: Inflation developments- moving average 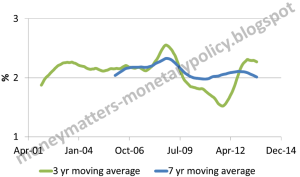 The fact that inflation control was better over the long than the medium run and better on expectations than on the actual developments really depends on the same underlying reason: non monetary shocks affect the rate of inflation more persistently and more deeply than assumed in the ECB objective to maintain inflation in the medium run lower but close to 2.0 per cent. Either averaging over a long period of time or the filtering of shocks implicit in expectations is needed to precisely measure the control of inflation by the central bank. A more provocative way to present this result is that the ECB promises more than it can actually deliver when it says it will achieve its target in the medium term.

The bottom line one can derive from the table and chart 4 is that currently available forecasts or projections show that inflation would move gradually over the next few years back towards the ECB target and would remain there for the foreseeable future (until 2023 in the Consensus forecasts and according to the break-even estimate).

In the light of what I have said above, about temporary shocks affecting inflation and the need to filter them out to really judge about the ability of the central bank to control inflation in the medium to long run, the inflationary forecasts/projections reported above are reassuring. But I am not reassured enough.
My own assessment of the risk of too low inflation
There are five reasons for not being completely reassured by the available forecasts/projections that show a gradual return over the next 5 years towards 2.0 per cent.
First, forecasts are necessarily assorted by a margin of uncertainty, for instance the professional forecasters projection have a standard deviation of 0.3 percent, which means that one cannot exclude (assuming a normal distribution) a 5% per cent probability of inflation remaining stubbornly low at 1.3 percent even in the long run.
Second, current forecasts may not sufficiently incorporate the fact that there has been a downward trend of inflation in the €-area over the last 3 years, from September 2011 at 3.0 per cent down to a trough of 0.7 percent in October of this year.
Third, the precedent of Japan is not reassuring: the OECD inflation forecasts (for GDP deflator) have consistently underestimated deflation between 1998 and 2012, in some years by a full 1.0 per cent.
Fourth, it is not clear to me that forecasts of inflation around 2.0% in 2018 are consistent with a rate of unemployment still close to 12.0 percent in 2015 and 10.0 in 2018 (according to professional forecasters): shouldn’t the output gap manifested by such a high unemployment rate exert a stronger deflationary pressure on prices?
Fifth, price and wage developments, as well as inflation projections, are close to deflation in the periphery of the €-area while they are far from it in the core. This difference is, of course, needed to remedy the competitiveness gap between the two parts of the €-area and is consistent with their different output gaps, but introduces another element of uncertainty: will the aggregate €-area development be attracted by the situation in the core or by that in the periphery? This question gets somewhat more worrying, considering that even in Germany, with a very low unemployment rate (less than 6.0%), wages are growing at a lacklustre 2.5%. Corrected for productivity and inflation, this gives a negative figure, which means that income distribution is moving further in favour of profits, when just the contrary would be needed to increase consumption in Germany and thus help reduce its mammoth current account surplus.
In conclusion, current forecasts and projections are that the €-area should not see a medium to long run deviation from the 2.0 percent target and therefore the very good record of the ECB in maintaining price stability should be confirmed. There are, however, sufficient reasons to fear that the developments could be less favourable. Alertness on the side of the ECB is thus of the essence. The recent cut of the Main Refinancing Operation (MRO) rate, as a reaction to the latest inflation figure, is a positive indication in this respect. In fact, a lower MRO rate lowers the cap to which the overnight rate (EONIA) is attracted as excess liquidity evaporates, it gives incentives to banks to hold more excess liquidity, is particularly useful for banks in the periphery (the only ones really borrowing from the ECB), thus reducing the perverse impact of monetary policy (tighter in countries in recession), it may reduce the spreads on the periphery bonds, it enhances the incentives to participate to a possible new Very Long Term Refinancing Operation (VLTRO), especially if granted at at fixed rate or even better with an asymmetric floating, whereby the cost can only go down but not up. As President Draghi has said, however, further moves may be needed in the future, also taking into account that a quarter point decrease of rates is a relatively small measure.
Further tools are indeed available:
While actions 6 and 7 have negative consequences that advise against them, except in exceptionally bad circumstances, those  in 1 to 5 could be used if indeed inflation would not be seen as returning gradually to the ECB target level. The ECB thus has tools to guard against too low rates of inflation and continue delivering price stability, even if it should recognise that this is possible more in the long rather than in the medium run.
[***] Research assistance was provided by Mădălina Norocea.

Previous: …and what about the other side of the pond?
Next: Should the European Central Bank do more and go negative?