My contribution on The Value of Money Controversial Economic cultures in Europe: Italy and Germany

Together with Christiane Liermann, Thomas Mayer and Matteo Scotto, I have edited a book  on “The Value of Money Controversial Economic cultures in Europe: Italy and Germany” published by Villa Vigoni Verlag. Jean-Claude Trichet wrote the preface to the book. What follows is my contribution to the book. In an other post, I published the introduction Thomas and I wrote.

In 1973 I started working at the International Cooperation Department of Banca d’Italia, to be later merged with the Research Department, after my postgraduate studies at ISTAO, in Ancona, and at the London Business School. I ended my work at Banca d’Italia in 1998, when I moved to Frankfurt, called by Sirkka Hämälainen to take care of Market Operations of the European Central Bank, a task that I kept until 2012. 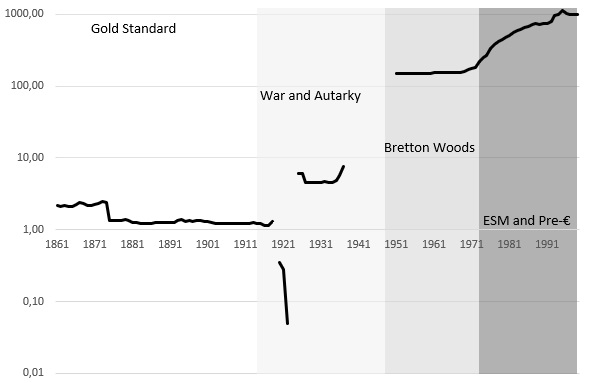 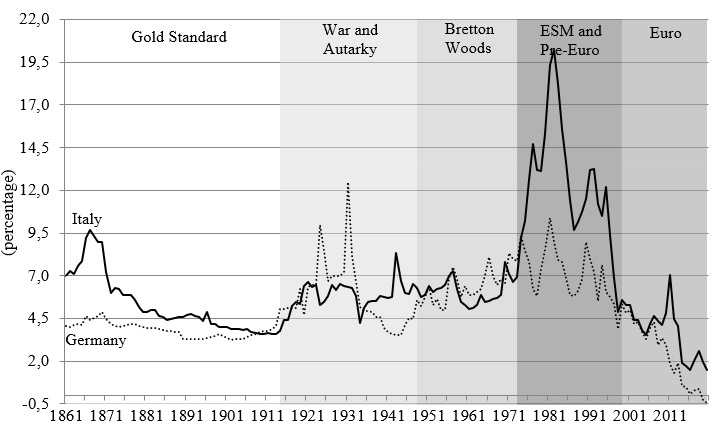 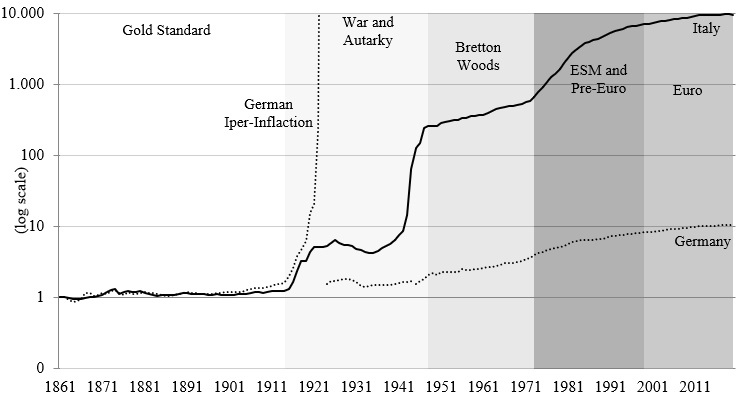 The period with the darker shading in figures 1 to 3 corresponds to my work experi­ence at Banca d’Italia and, much more importantly, to the period in which Italian mon­etary policy was basically left to the discretion of Italian authorities. Of course, even during this period different incarnations of the European Monetary System somewhat limited this discretion, but not to the degree prevailing in the Bretton Woods fixed parity system.

If people would only look at the darkly shaded 1973-1998 period, they would be im­pressed, as I was during my career at Banca d’Italia, by the relentless depreciation of the lira against the Deutsche Mark, even if at lower speed over time. The same strong impres­sion would derive from looking at the dark area in figures 2 and 3, with the consistently higher interest and inflation rate, as read from the higher steepness of the curve of the price index, in Italy than in Germany.

While the time series in Fig. 1 obviously ends in 1998, when both the lira and the Deutsche Mark were substituted by the euro, figures 2 and 3 also report the data for the two following decades. One can, looking at them, still find some trace of a more stable situation in Germany than in Italy, notwithstanding the common currency, in particular regarding the behaviour of the interest rate, because of the large and variable spread between the German and the Italian interest rate.

Impressed by the persistent pattern of less stability in Italy than in Germany, one would be justified in looking for an explanation in constant different features between the two countries: do we have to search for some deep Teutonic or Italian characteristic to explain the diametrically different monetary histories of Germany and Italy? This line of research would seem to be, albeit indirectly and partially, confirmed by the observation 1 that Italy had, in the 1861-1979 period, a rate of inflation nearly 5 percentage points higher than that of France, the United Kingdom and the United States, considered sequentially as the relevant comparator. Consistently the lira had an average annual depreciation in the same period of about 4 percent, while higher nominal interest rates prevailed in Italy.

A look at the period before 1973, indeed one starting around the national unity of the two countries, shows that this line of research is not justified: the continuous devaluation of the lira, the persistently higher rate of inflation and interest in Italy compared to Germany are artefacts from making the observation period start in 1973. Indeed, even a cursory look at the period before 1973 in figures 1, 2 and 3 destroys the impression of constancy in the different monetary development between the two countries.

Of course, the first, paroxysmic difference is the German hyperinflation of the 1920s: inflation recorded quite an increase in Italy in the aftermath of World War I, but nothing comparable with the German hyperinflation, the virtual annihilation of the exchange rate of the German currency as well as higher German interest rates. Only the currency reform of 1923 tamed these extreme developments. Also, after World War II Italian inflation recorded an increase, but not to the point of requiring a monetary reform, with the introduction of a new currency, like in Germany in June 1948, even if the price control imposed by the Nazis make the reading of inflation in that country very uncertain.

These were extreme developments, connected to historical political events, but they are not the only times in which monetary stability was lower in Germany than in Italy. Indeed, an overall look at the entire period reported in figures 1 to 3 shows that the persistent depreciation of the Italian currency with respect to the German one as well as the higher inflation and interest rates in Italy with respect to Germany are really only a characteristic of the 1973-1998 period.

A closer look at the figures shows that interest rates were higher and more volatile in Italy than in Germany during the “Gold Standard” period, but a look at the German series in that period sheds some doubts about the representativity of the reported inter­est rate, which remained quasi constant for decades around 4 per cent, while inflation ranged between + 19 and – 10 per cent, which would have resulted in wild swings in the real rate of interest. During the “War and Autarky” period interest rates were more stable in Italy than in Germany, while no significant difference appears during the Bretton Woods years.

Furthermore, the German currency sharply devalued against the lira not only at the occasion of the hyperinflation but also around the middle of the 1870s, while the exchange rate between the two currencies was stable in the remaining part of the gold standard period and during the Bretton Woods years.

Exchange rate developments can be further illustrated looking (Fig. 4) at the effec­tive exchange rates of the Italian and the German currencies, which take into account the behaviour of the exchange rate toward a portfolio of currencies and not just one, as in the bilateral exchange rate. 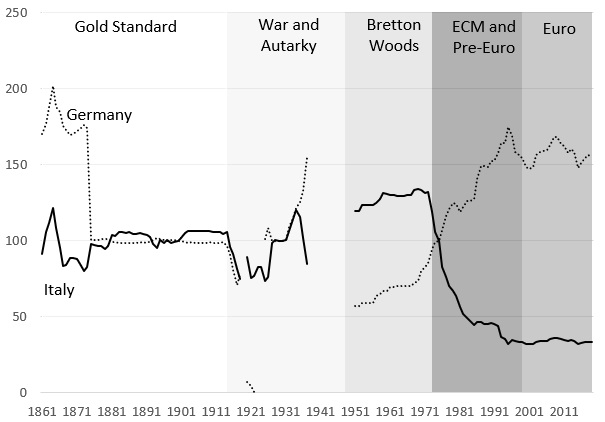 The most trustworthy gauge of monetary stability is the rate of inflation, not only for its meaning but also because it is the variable that can be more precisely measured. There are numerous years in the 1860s and 1870s in which Italian inflation was 3 percentage points, or more, lower than in Germany, the same happened in a number of years of the first three decades of the twentieth century, i.e. not only on the occasion of the hyperinflation. But there are also many years in the pre-1973 period in which Italian inflation was higher than the German one. Furthermore, the fairly frequent years of negative inflation in either country does not allow us to draw inferences about monetary stability just by comparing the respective levels of inflation. A more telling statistic is the variance of inflation, as reported in Tab. 1 for different periods. To avoid the statistic to be basically determined by the two extreme episodes of the hyperinflation of the 1920s and the aftermath of the Second World War, leading to German Monetary Reform, the observations for 1922-1924 and 1944-1948 are excluded.

Few interesting results emerge from or are confirmed by this table:

In conclusion, Italian monetary conditions were much less stable than German ones in the 1973-1998 period, in which monetary policy had much weaker constraints than in the preceding Bretton Woods period and before the euro was introduced. Howev­er, this was by no means a constant feature in the monetary history of the two countries. Indeed, over a century and a half in which the two countries had a national currency, there was more monetary instability in Germany than in Italy, even omitting the hyper­inflation and the 1948 German monetary reform. We therefore should not look for some immutable, metaphysical characteristic of the two countries but rather search for differ­ent conditions that explain over time the different performance of the two economies. This is the task for the other chapters in this section. Can one find the reason in different schools of economic thoughts? In fiscal developments? In the institutional monetary set-up? In different policies by the respective central banks? In different wage negotiation frameworks and ultimately in income distribution issues?

The concrete implication deriving from our result is that merging in a single cur­rency countries with very different monetary histories is not a recipe for failure and monetary instability if the variables setting monetary policy, and in all likelihood fiscal policy as well, are appropriately chosen. The fact that Italy and Germany have never had as much monetary stability in their national history as they are having with the euro is an encouraging sign, but of course not a proof, that the variables setting monetary policy in the euro area are adequate, even if not optimal. However, this chapter does not perma­nently settle the question of what the right variables are, it just shows that the search for the reasons of a different monetary performance is legitimate, since there is no destiny condemning Italy to less monetary stability than Germany.2

Previous: Introduction of The Value of Money Controversial Economic cultures in Europe: Italy and Germany
Next: The evolving nature of central banking: Where next for Europe?