Is the risk of stagflation real?

Together with Monika Grzegorczyk and Pauline Weil.

Most economic forecasts predict a return, in the medium-term, to pre-pandemic growth and inflation. Nevertheless, the European Central Bank and fiscal authorities need to be vigilant for signs of the contrary.

Stagflation worry seems to be the new fashion in Europe and other advanced economies, as the experience of the 1970s supply-side shocks, which raised inflation and lowered growth, is actively revisited. In a recent press conference, European Central Bank President Christine Lagarde had to reassure listeners that stagflation was unlikely.

So far, we have had the ‘stag’ component in 2020, with a fall in real income of more than 6% in the euro area, and we have the ‘flation’ component in 2021, with consumer price inflation higher than 4%, but not the two at the same time, as stagflation would require. Other advanced economies are going through similar experiences. The interesting question is what could happen in the medium term: could the “stag” and the “flation” components occur contemporaneously and persist for some time?

More generally, on what path will the euro-area economy settle after the COVID-19 shock?

In principle, three scenarios are possible:

The first scenario is the most attractive, as the ECB could control inflation tightening monetary policy while avoiding a recession. The second scenario is lacklustre, but not worse than the last decade or so. The third scenario is the most worrying, with two ‘bads’, high inflation and low or negative growth, and the central bank faced with the dilemma of which ‘bad’ to fight.

In this post, we want to ascertain which medium-term macroeconomic scenario is built into the forecasts of official institutions, of private forecasters and, as much as possible, into market prices.

There is some justification for the concern on the inflation front.

Consumer prices continued to accelerate in October, reaching 4.1% (Figure 1). This is the fastest growth observed since 2008. 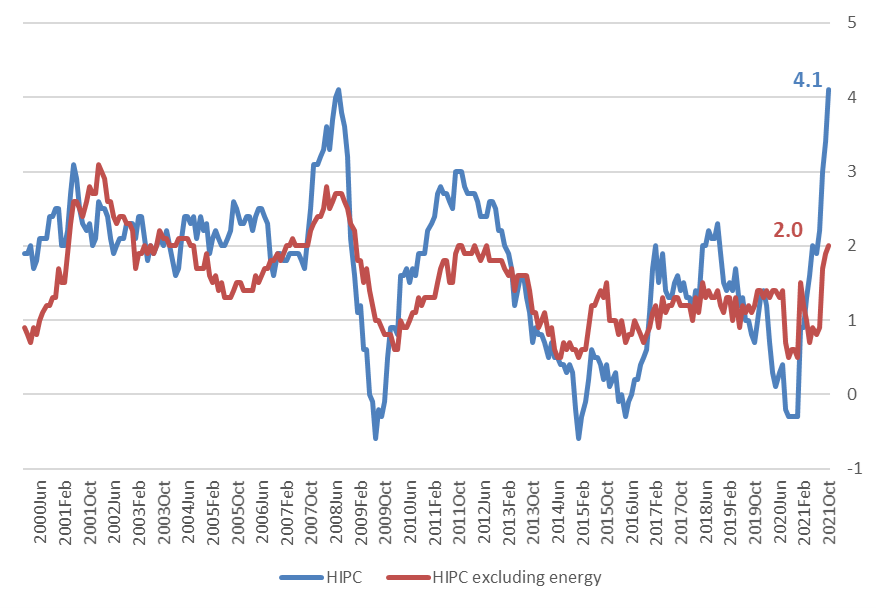 A look at the drivers of higher inflation is the first way to assess whether growth above the inflation target of 2% is temporary or is likely to persist.
Figure 2 shows that the recent increase in inflation is driven mainly by energy prices, in particular gas. Some temporary factors, such as a cold winter and a hot summer, caused a boom in gas demand in Asia. Supply-side issues are also playing a role, including logistic bottlenecks and COVID-19 straining the supply of labour. These factors have different time scales. The lower supply of LNG due to delayed maintenance of work during the pandemic and insufficient gas storage facilities might be resolved in the medium term. On the other hand, decarbonisation and the energy transition might keep gas prices high over a longer period since gas is a transitory energy source. Oil and gas futures have closely followed spot prices in their precipitous ascent, but show no evidence of a further increase in energy prices which would keep inflation high for a long time. In the 1970s, there were two waves of oil price increases, the first in 1974 when the increase was nearly threefold and the second in 1979, when there was a further doubling of the price of oil. Overall, between 1973 and 1980 the price of oil moved from about $3 per barrel to close to $40. The increase of the gas price by a factor lower than 2.5 does not, so far, compare with the oil shock of the 1970s.
Figure 2: Composition of HICP inflation in the euro area, 2008-2021 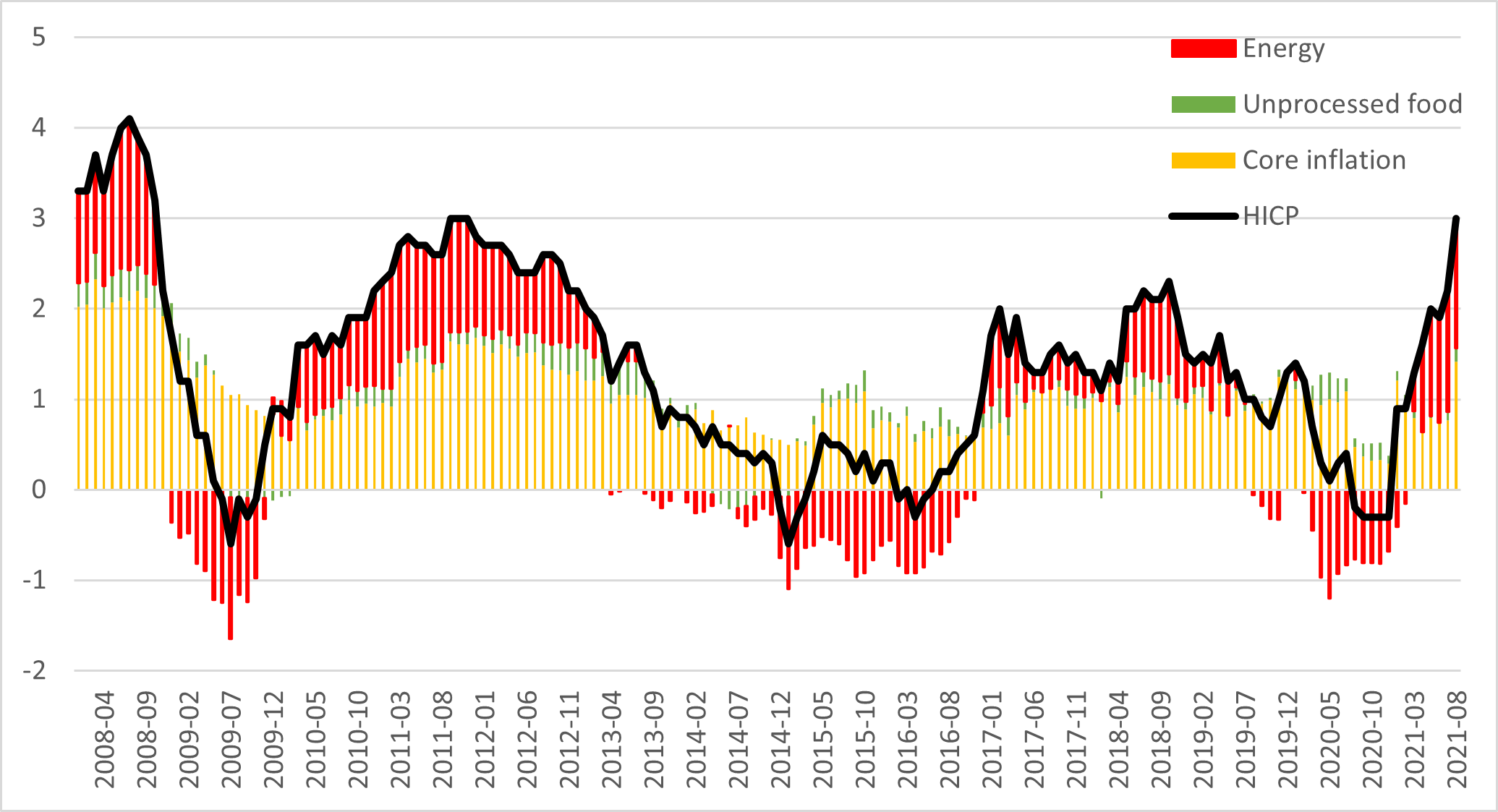 Factors other than energy have also contributed to price growth: core inflation reached 1.9% in September 2021 (Figure 1). Services contributed to the increase, notably in sectors requiring high personal contacts, as they reopened after lockdowns. Services inflation is expected to have reached 1.7% in September according to the ECB. It is worth noting that since inflation is calculated according to the consumption patterns of the previous year (ie 2020 for 2021 inflation) services are underrepresented in the current basket. Hence, the ECB indicated that using the 2019 weights for inflation would push services inflation in September to 2.1% instead of 1.7%.
Supply-side bottlenecks are also playing a role, particularly increased freight costs. Figure 3 shows an unprecedented hike in freight cost from China to the US and Europe, even if costs have moderated more recently. These supply disruptions are caused by imbalances between supply and demand, as demand increased faster following the ease of lockdowns but with labour shortages in the logistics sector. Anecdotal evidence shows the huge demand for workers in transportation, both truckers and port workers, and the unloading of goods shipped from China.

A summary view of expected inflation, as gathered from market prices, can be gauged from looking at break-even inflation, as in Figure 4. While the fixed leg of inflation swaps with a five-year maturity prevailing over a five-year horizon dipped below 1.0% at the beginning of the recession in the euroarea, it is now close to 2.0%, i. e. the current level of core inflation. This is consistent with financial market expecting energy increases and other special factors to be temporary. 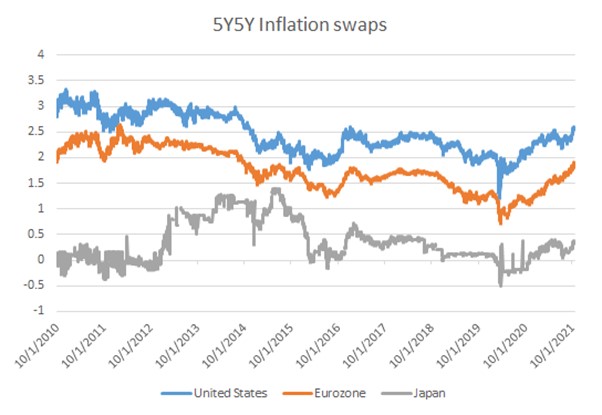 A longer-term assessment of inflation in the euro-area can be gathered by looking at Figure 5 which maps the HICP with two trends: one starting in 2001, with a slope of exactly 2% and another one between 2014 and 2021, with a slope lower than 1%. 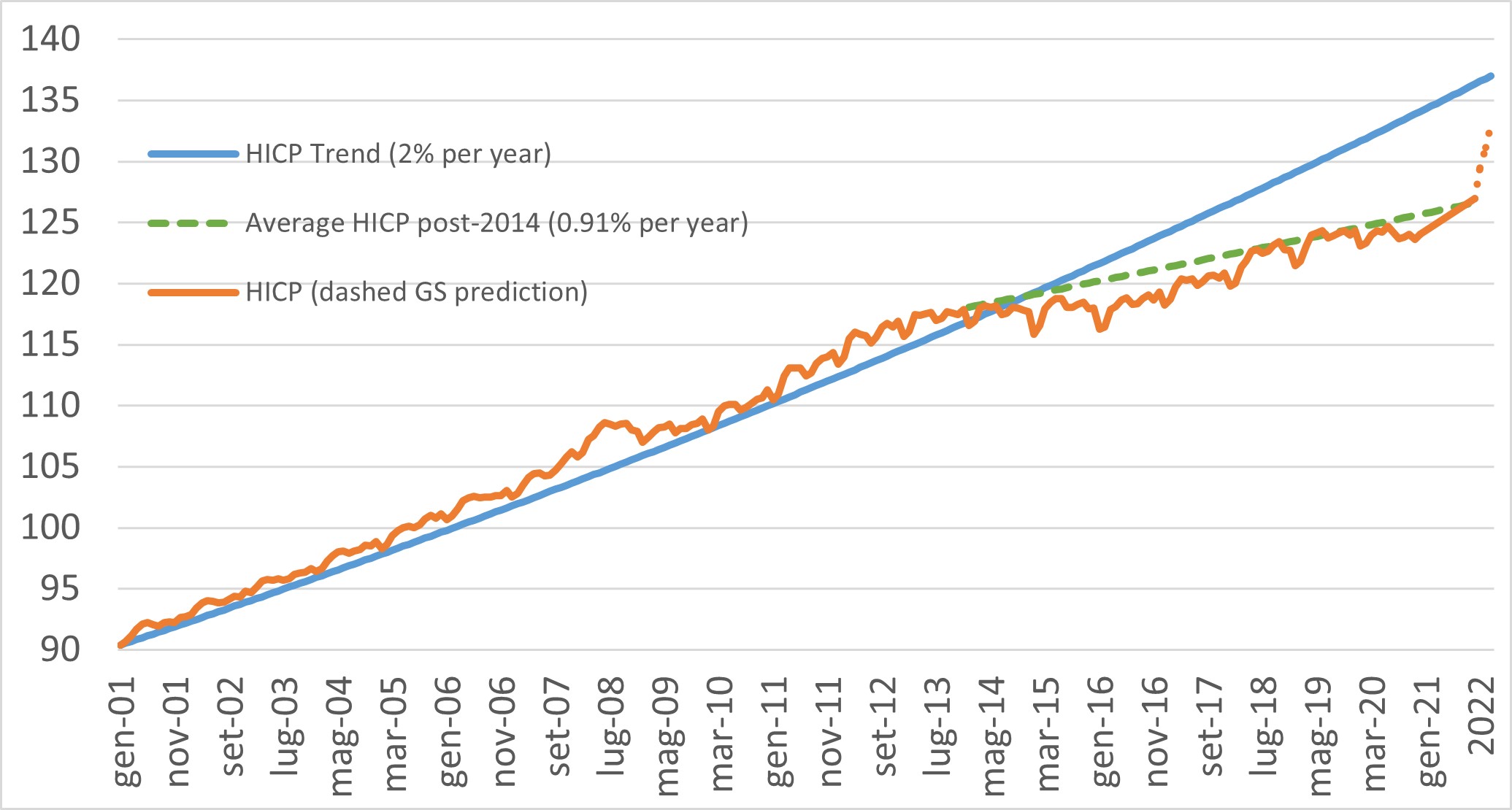 Source: Bruegel based on Eurostat

Two phenomena emerge from the figure: first, a clear break of the HICP trend from the end of 2013 and second, a clear acceleration of the price level in 2021, moving it towards the level it would have reached if it had grown constantly at 2% for the entire period. Of course, since the ECB is an inflation and not a price level targeter, there is no need for the 2% trend to be reached. Still, based on Figure 5, one could not exclude that the ECB could return to its 2% inflation objective, as implied by the break-even inflation in Figure 4.
The framework that seems most useful to examine whether growth is stagnating post-COVID is the one developed by Summers and Blanchard to assess the hysteresis phenomenon, the idea that recessions could have permanent, or at least persistent, effects on potential output that require gradual macroeconomic easing to recover from the lingering adverse effects on employment.
We use this framework here without prior knowledge of the consequences of the COVID recession, more as a scheme for interpreting developments than as a device to test a hypothesis.
Figure 6 reports the (log of) real GDP in the euro area between 1996 and June 2021. The line is then extrapolated to 2024 based on Goldman Sachs forecasts. As seen in Table 1 below, estimates from this investment bank are close to those of other forecasters, available until 2023, so choosing one or the other source does not make much difference.
Two trends are identified in the behaviour of real GDP: a first one prevailing between 1995 and the beginning of the global financial crisis in 2008, a second flatter one, starting between 2008 and 2009.
The global financial crisis follows the case of ‘super-hysteresis’, a drop in GDP with a persistently lower rate of growth after the recession1. This is not the case of the COVID recession, unless the available forecasts for the next three and a half years are badly wrong: GDP is forecasted to return (close) to pre-COVID levels in a couple of years, so neither super-hysteresis nor hysteresis seem to prevail. The difference between the consequences of the two recessions is not surprising: the first one was caused by endogenous disturbances generated in the financial sector, the second was fully exogenous and thus likely to be surpassed when the external shock dissipates.

Source: Bruegel based on Eurostat

To complete our harnessing of information about real future developments, we would need an indication of which rate of real growth is implicit in financial market prices. Not being able to find an indication for this variable, we leave the relative cell void in table 1. This table summarises all the information gathered to indicate which of the three scenarios (higher growth and inflation, return to pre-pandemic or stagflation) official forecasters, private forecasters and the market are converging on.

The overall reading of the table is that all projections converge on the second scenario, a return, in the medium-term, to the pre-pandemic growth and inflation. None of the three sources (official institutions, private forecasters or financial markets), as far as one can read into them, foresee either stagflation or higher growth and inflation.
This could be, however, a case of extended group thinking, with different forecasters converging on the same view. A collective error would not be surprising given that forecasts are built with little relevant prior experience of a recession brought on by a pandemic. The ECB and fiscal authorities thus need to be vigilant for signs that the situation is developing in a different direction than expected.

Status of the labour market

Anecdotal evidence of labour shortages may lead to an anticipation of stronger wage bargaining power, but this is dampened by several factors. First, in some sectors and regions, the labour shortages are due to people still being unable to work due to pandemic restrictions or a high number of COVID cases. Second, there is anecdotal evidence of a large number of job openings without candidates. The demand for workers is high, but the unemployment rate has not returned to pre-pandemic levels. This would mean that unemployment data points to a mismatch in the location of job openings and the required skills with those of the unemployed. The professional forecasts collected by the ECB anticipate that the labour market will largely recover from the pandemic but only in the medium term, namely in five years (Figure 5). All in all, there seems to be a lag between economic recovery and labour market recovery that confirms that wages may not be a factor in sustaining inflation in the short to medium term.
Figure 7: ECB SPF unemployment forecast 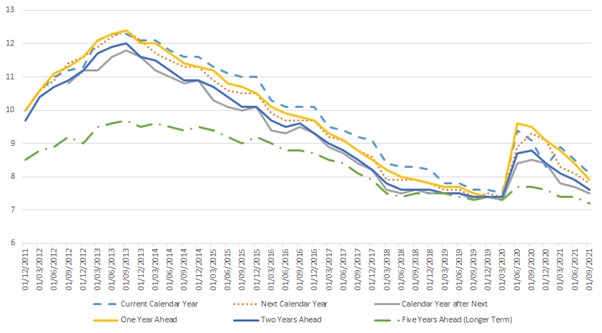 Previous: The evolving nature of central banking: Where next for Europe?
Next: Does money growth tell us anything about inflation?