Is the ECB really so generous?

Francesco Papadia May 08, 2014 0 Comment
A simplified, to the point of being simplistic, approach to understanding the transmission of monetary policy to the real economy consists of three basic links:

Relations 1. to 3. establish a chain link between the interest rate fixed by the central bank, which is the tool, and price developments, which is the objective.

There are many, important overlooked aspects in the framework sketched above, which require thousands of pages of monetary policy analysis rather than the nine lines I used above. Just to mention a few, without any pretence of comprehensiveness, these are four of the overlooked aspects:
So far, I have written 9 lines to present a simplified monetary policy transmission framework and twice as many to show how limited it is. Still, for the purpose of this post, I want to use the ultra simplified model to answer my title question: Is the ECB really so generous? Another way to put the same question is whether 25 basis points is the full cost of central bank funding. Yet another formulation, looking at quantities rather than the interest rate, is whether banks borrow from the ECB consistently with the very low cost it applies to its  refinancing operations.
When formulated in such stark terms, the question can be answered in an equally stark way: central bank funding is not the most expensive one, the interest it applies to its operations is not the marginal cost leading, in my simplified framework, the entire balance sheet. On the basis of information I have collected for some large peripheral banks, they are willing to pay 80 to 150 basis points more on term deposits from retail customers than the 25 basis points they would pay for borrowing from the central bank.
Table 1: Retail deposit rates for various commercial banks


Some 10 to 15 basis points of this spread,  [2]  is explained by the maturity premium, but the rest is just additional financial cost. This implies, in quantity terms, that banks borrow less from the central bank than a mere financial cost comparison would dictate. This applies even now when banks, especially in the periphery, can borrow on more favourable terms and larger quantities from the market because of the extraordinary improvement in financial conditions in the last couple of year.
The reasons why banks prefer borrowing at higher cost from the market rather than more cheaply from the central bank are basically four:
Add to these reasons a more practical one: financial analysis gives more importance to stocks, while practitioners often reason in terms of flows, thus the current bank deleveraging process, which reduces the need of funding flows, further weakens the demand of central bank funding.An alternative way to see whether banks, especially in the periphery, pay more than the 25 basis points of the MRO rate to borrow from the market is to look at data published by Banco de España on borrowing on the repo market by Spanish banks. While, obviously, the cost of market borrowing is much lower in this case, there have been many cases still in 2014 in which rates exceeded the MRO level, sometimes by as much as 25 basis points.
Among the reasons why banks may prefer to borrow more expensively than from the ECB, stigma, while not necessarily the most important one in absolute terms, takes a particular importance when it comes to assessing the monetary policy stance. This is not fully represented by the Main Refinancing Operation (MRO) cost that banks pay to borrow from the central bank. While it is difficult to estimate what part stigma plays within the additional spread that banks in the periphery pay to borrow from the market with respect with what they would pay borrowing from the ECB, it is reasonable that this could be at least as much as the MRO rate, meaning that the stigma-augmented cost of borrowing from the central bank is not, particularly for peripheral banks, 25 basis points but may be twice as much, or more.
A higher than 25 bp, stigma-augmented cost of borrowing from the ECB also helps explaining what one could see as the hasty reduction of borrowing by banks under the two 3 years LTROs, which brought it to about a half of the around 1 trillion that was initially granted. The main reason of this reduction was the improvement in the funding conditions for banks but stigma must have contributed to it. The immediate consequence of the lower recourse to the 3 years operations was the sharp reduction of excess liquidity, which has reached in some recent weeks values below 100 billion with respect to more than 800 at the peak of the crisis.

As can be seen in chart 2, which I have already presented in previous posts [3], showing the relationship between excess liquidity and the spread between the overnight rate (EONIA) and the MRO rate, low values of excess liquidity push EONIA away from 0, corresponding to the level of the deposit facility, towards the MRO. In addition, for low values of excess liquidity, the relationship becomes very noisy, indeed in a previous post [4] I have argued that there is an intrinsic oscillation when banks can, as in current conditions, choose the amount of liquidity they borrow from the central bank and its stock is no longer very abundant, as it was during the more intense phase of the crisis.


Chart 2: Correlation between EONIA and excess liquidity since 1999 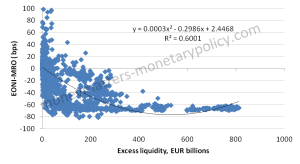 In conclusion, the monetary policy stance is less easy, because of stigma, than just looking at the very low, 25 basis points, level of the MRO rate would indicate. The real cost of central bank funding may in reality be at least twice as high. In addition, banks return liquidity to the ECB more quickly than if there was no stigma and this pushes money market rates up and makes them more variable. An effective campaign against stigma, by stressing that ECB facilities are there to be used, would help on both fronts.

[1] Ulrich Bindseil, Central bank collateral, asset fire sales, regulation and liquidity, Working Paper Series, no 1610, Nov 2013;
[2] The term premium is calculated from the relevant sovereign bonds and refers to the difference between6 month and 1.5 year maturity, the former being the approximate remaining maturity of the two 3 years Longer Term Refinancing Operations and the latter being the average maturity of the relevant time deposits;
[3] A cobweb in the Eurotower
[4] Three liquidity scenarios after the year-end  and  € liquidity is getting more valuable: what can be done about it?

Previous: Titus Maccius Plautus and the EU Troika
Next: Where could ECB interest rates go?